You’ve almost certainly seem them, maybe you’ve even committed it to memory. Rep range charts are to lifting weights as cooking temperature charts are to grilling. If you’ve never seen one, allow me to be your first: 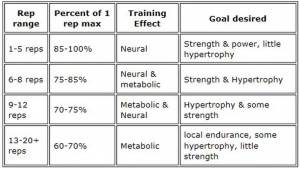 Maybe yours has slightly different reps, or is represented by a spectrum with some overlap, but the general idea remains as similar as it is misleading. Low reps for strength, high reps for muscle, conditioning, or no results depending on who you ask.

This chart, as a heuristic, is not without value. If this is the first time you’re seeing it, you’re probably learning something useful today. Low reps with heavy weight tends to increase adaptation to maximal strength, and higher reps with necessarily lighter weight results in more hypertrophy as a result of stimulating the mechanisms for muscular hypertrophy.

Looked at from the logical conclusion, doing 20-rep sets of squats or deadlifts is never going to allow you to realize your potential 1-rep maximum.

Likewise, only lifting heavy singles is never going to allow you to realize your maximum muscular potential.

But memorizing this chart that is intended to be a heuristic can be incredibly misleading!

It can lead someone whose primary goal is strength development to never wander past the 5th rep.

And it can lead someone who wants to get swolerjacked to never approach their maximal weight limits.

So the question is what you should do instead?

Do ALL of the rep ranges, some of the time.

The reason for varying your rep ranges is an example of the whole being greater than the sum of it’s parts, or one plus one equals three.

Each of these ends of the spectrum, taken alone, may be beneficial. But together they form Voltron.

Anecdotally, I can tell you that the single fastest way to jump start someone’s flatlined progress, if they have always been training in a particular rep range, is to change it up. A perennial 5-3-1 lifter can start making almost astonishing gains when they start including 8, 12, and 20 rep sets.

Which will inevitably bring up the idea in some people’s minds that you can’t do high rep, or 20-rep sets of deadlifts.

One of the things that helped me build an indomitable deadlift (and back) was doing outrageous feats of volume in the deadlift. Workouts of 100 reps, or sets of 20 were not at all uncommon (although I’ll note that over all my training my deadlift average reps per set is 5.9). In 2014 at Juggernaut’s BUS3 Brandon Lily told me that one of the things that helped him build his deadlift is the “stupid shit” they would do with it. Sets on the minute, high rep sets, etc. In other words, lots of volume, lots of density, and lots of variability.

People get so stuck on rep ranges, and ideas about how many reps they should be doing for their goals. Here is the answer from my buddy @maxshank. Check out my blog at dellanave.com for an extended article on the topic. Link in bio.