As I mentioned in my last email, I’m in the midst of wrapping up a really interesting case study but I have the hardest time keeping things under wraps, and I wanted to share the progress with you guys first.

Here’s a bit of back-story (no pun intended.)

About 10 months ago I had a trainer show up to my gym in (his own words) rough shape. Like many people do, Martin put his work before his own health and let his fitness levels slip pretty substantially. And worse, low back pain from his scoliosis had crept back in. Now I want to be clear, he was still in better shape than probably 90% of the population. But for himself, he wasn’t too happy where he was. He wanted better.

The interesting thing about this situation is that he didn’t really let on to any of this to me. He sort of just said he was looking for something new and different. He especially didn’t mention anything about a back issue.

This is especially important because I am pretty well known for helping people with back troubles. Normally people will tell me what’s going on and I will offer suggestions of things for them to test and monitor their progress. He didn’t let on there was an issue, so I treated him just like any other regular client. Remember this, because it’s important.

So this trainer who had finally made the decision to take back his own health started out like everyone else by simply testing all his exercises in the gym. I remember noting that one of the movements that really stood out for him was the Jefferson deadlift.

This by itself isn’t all that notable. I see people fall in love with the Jefferson all the time, so I don’t think much of it.

What I didn’t know was that he had hurt himself doing a sumo deadlift not all that long ago, and he was very reluctant to give deadlifting a shot at all. I do remember the first time I had to cue him on the Jefferson. Being a trainer himself he was much more familiar with more traditional movements and this was so foreign to him, but he was open minded.

Somewhat oddly considering his conventional training background, the buy-in for the biofeedback testing came very naturally for him. In hindsight it might not be that surprising because people in low back pain are willing to try almost anything to get out of pain. But I didn’t know that, so I just thought he was an exceptionally early adopter!

Anyway, the first time he loaded the bar up to 95 pounds, I promptly fixed his poor foot position, and he stood up with a bewildered look on his face and said, “That felt surprisingly good.” Later in the workout he eventually worked up the courage to pull 135 while following the testing guidelines.

Over time Martin noticed that only one side of the Jefferson tested well most of the time, so he trusted the testing and just did his Jeffersons on the one side instead of evening it out.

Weeks and months came and went with this guy training very consistently three times per week. It’s hard to stress the importance of consistency too much, but I digress.

A couple months ago, during one of our max testing days, he pulled 405 with ease.

Beyond being able to pull over double his bodyweight in the Jefferson, something even more significant happened.

A couple weeks later he pulled a sumo deadlift PR of 50 pounds more than his previous best. Pain free.

This guy hadn’t pulled sumo in over a year and not only did he pull a PR but he did it, again in his words, “without hobbling out of the gym in pain like I did last time.”

In the interest of you getting on with your Saturday I’d like to tell you that’s the end of the story, but that’s not it at all.

About a week after I returned from our honeymoon trip to Italy, Martin came up to me holding an iPhone. He says to me, “Hey dude, this probably wouldn’t impress anyone on the Internet (without much sleep and not the best nutrition) but I’d like to show you how much muscle I’ve gained since starting training here. Look here, you can’t even see my scoliosis because the muscle is covering it.”

I took one look at the picture and said, “Martin, that spinal curvature isn’t covered up. It’s gone.”

I think the picture speaks volumes:

His doctor-diagnosed x-ray confirmed spinal curvature had changed dramatically over that time thanks to asymmetrical pulling.

Keep in mind I had little idea what had been going on over the previous 8 months. I didn’t know he had scoliosis, and I didn’t even know he was dealing with a back pain issue. Admittedly, he slipped through some of our typical assessment procedures being that he was a trainer himself I sort of just assimilated him right.

All I did was teach him the biofeedback testing protocol, and show him some unique variations that he might want to try.

Again, a picture is worth a thousand words: 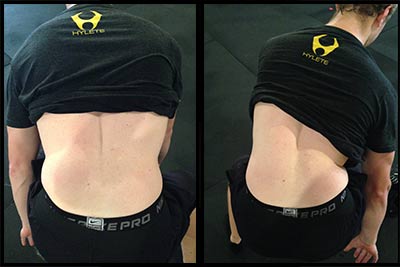 I realize that not everyone has the highly-calibrated trainer eye that myself and my peers have for viewing human movement, but hopefully you can see that even in this naturally awkward and asymmetrical lift, one of the positions is clearly contorting his body into a twisted position, while the other is nicely aligned. Further, you’ll notice that one position exacerbates the natural curve from the scoliosis, while the other slightly opposes it.

Martin’s body was telling him exactly he needed to do to fix his back, and all he had to do was listen.

Now I’m a realistic and evidence-based person, so I won’t claim that everyone cure pain with the Jefferson or that biofeedback testing will cure cancer. But the photos speak for itself in terms of what listening to your body can do for not only your performance, but also just your general health.

You have to remember, I didn’t tell Martin he should do any specific thing. I just taught him how to test and told him to trust it. He did the rest simply by following his body.

Because I think this case study is so interesting I wanted to give you an exclusive look at a blog post in the works. I’m working with him to get his old records and x-rays, along with new measurements and a screening very soon.

My belief, that is being continuously validated by my experiences with my clients, is that just about all you have to do to make incredible progress in the gym is follow your body.

When you work with your body, instead of against it, you leverage your biology to the fullest. As my friend Frankie Faires says, “Better is your birthright.” You don’t have to work for it, it’s how you function.