How a certain piece of benign training equipment was able to gain such a personality of it’s own is sometimes beyond me, but the kettlebell has done that. The level of misunderstanding and confusion surrounding this one tool is unmatched by any other equipment. All it takes is hearing some variation of the familiar refrain to see it all reflected at once:

It is also not a kettleball. 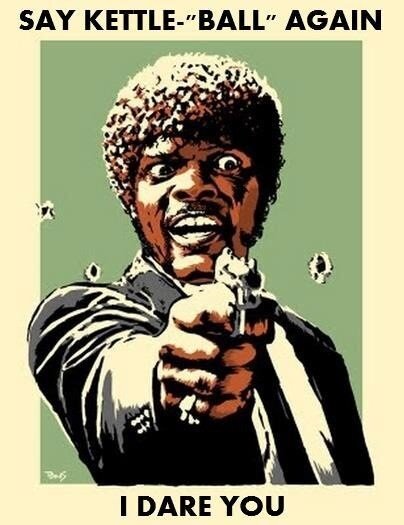 But, you can thank the person who got excited about this “kettlebell craze” for the kettleball class at your local community center.

Then you have the truly well intentioned yet misinformed. There is a certain population for which the kettlebell is the end-all be-all tool of strength and conditioning. These people have been convinced, not through the indoctrination into the strength secrets of the former union of Soviet socialist republics, but through cunning marketing and a lot of theater that there is one path to unyielding strength and it is through the kettlebell.

Let’s get something out of the way right now: Using a kettlebell to build maximum strength is like using a tack hammer to build Tōdai-ji. I’m not saying it’s impossible, I’m just saying you will die long before completion. 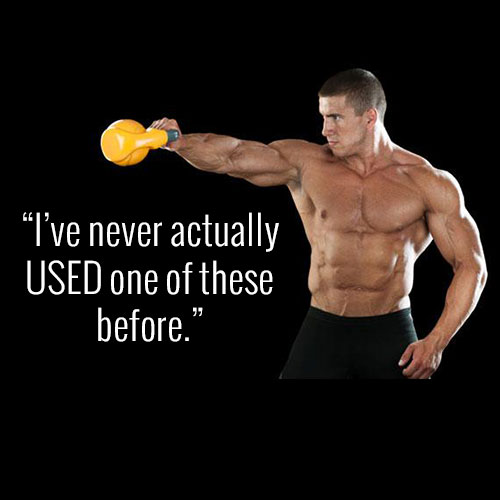 Here are three of the biggest reasons the kettlebell is a ridiculously ineffective tool for building maximum strength:

Their size: A pretty good deadlift for a man is double-bodyweight. The average American male weighs 175lbs. That’s a 350lb deadlift. The largest kettlebell you can acquire anywhere (to my knowledge) is a 92kg monster that weighs 203lbs. Do you see the problem? Kettlebells simply don’t get weigh enough to elicit a response when we’re talking about serious strength.

Progressive resistance: Traditional free weights allow weight changes down to 2.5 or 5lbs, and even smaller increments if you have fractional plates. Kettlebells are traditionally sized in 4kg increments which means 8-9lb jumps. For overhead work this can be absolutely devastating especially to women. That’s assuming you have the luxury of bells in increasing and decreasing sizes, which in the case of most kettlebell trainees is not true. You’re lucky to have one or two, much less a full complement in 4kg jumps from 12kg up to 48kg. If you tell me that you can build the level of strength required to deadlift double-bodyweight or overhead press your bodyweight with a 35lb kettlebell I am simply going to laugh in your face.

Leverage issues: For better or for worse, due to the offset leverage and awkward size and shape the kettlebell can present several problems in developing greater strength. Two examples to highlight what I mean. In an overhead press with a kettlebell, due to the positioning on the outside of the wrist, the bell pulls the arm into external rotation and requires muscular force to counter that leverage. Besides simply not being a good force vector for some people, fighting against that leverage cuts into what you can direct upward into the path you’re actually trying to achieve:the overhead press. Another example is my experience with doing a goblet squat with a 203lb kettlebell. It is nearly impossible due to the extreme forward bias of the weight and the amount of pressure it exerts on the arms to hold it in place. It is much harder than a 203lb barbell front squat. I have yet to goblet squat it in the traditional way of holding it by the handle due to the pressure on the biceps, upside down works better. One could make the argument that it takes more overall strength to squat with a kettlebell in this way, so how is that a downside? Well first of all, I can assure you I did not build up the leg strength to be ABLE to squat it by squatting kettlebells, I did that by squatting and deadlifting over twice that weight. Second, unless you have access to bigger and bigger bells, in progressive increments above 100lbs it is fallacious to argue you could develop that strength with kettlebells. You simply are not going to make the jump from goblet squatting a 24kg to a 92kg kettlebell.

They’re uncomfortable: This isn’t strictly a strength issue, but I know some of you are fellow trainers and this is important. A lot of your clients don’t like how the kettlebell feels on their arm or wrist. Especially female clients. You can be an idiot and tell them things like they will get used to it, like I did when I first started training women. This is a mistake of incalculable proportions. Most of your clients don’t want to toughen up, get used to it, or develop scar tissue on their forearm that prevents them from being hurt by the ball of iron resting on it. You can try to tell me that if your technique is perfect then it will float gingerly on your wrist, but you neglect to acknowledge individual anthropometry and the  FACT that meets at a painful intersection of thin skin and bone.

The ultimate conclusion is that the kettlebell simply is not the best tool to develop maximum strength. There are a lot of really strong guys out there who now train with kettlebells, who developed their strength using other, more productive tools. There are also a few genetically gifted individuals like Ivan Denisov who possess the kind of freakshow maximum strength we’re talking about and claim the kettlebell (specifically heavy double-kettlebell long cycle) as their training tool of choice.  Considering there are less than a handful of these beasts in the world, it’s not unreasonable to assume they would have developed that strength if they had chosen table tennis as their sport.

As a final consideration, since to me it is always important but secondary, it’s worth considering the efficacy of the kettlebell for muscle hypertrophy or in the context I care about: “looking good naked.” To this I will only say one thing, and that I make it a general rule that if I want to look a certain way I do more of what the people who look the way I want to look do (and use.) What do bodybuilders use (besides drugs?)  Start there.

Then Why Do You Have So Many?

Great question! I love kettlebells! I think they’re a fantastic tool for what they’re most suited to. In few words:

Kettlebells are best for moving a small weight quickly.

Some of the most fundamental and popular kettlebell movements highlight this fact. Swings and snatches make up the foundation of ballistic kettlebell work. To that I would add the push press and/or jerk as one of the very best things you can do with a kettlebell.

You can snatch a dumbbell, but without being able to do the backswing as in a kettlebell snatch you have to do a dead snatch or hang snatch, and both can get pretty sketchy after many reps. The biggest issue I see with the dead snatch is that the handle is so low to the ground it forces people to round their backs over to get lower than their hips allow them to. At that point they initiate the pull by extending at the spine rather than at the hips. Not great.

Push presses work fairly well with dumbbells, but there are aspects of the size and shape of the kettlebell that allow you to better transfer force from your legs to the bell. This makes it more efficient and allows you to get more out of the energy you put into it.

Here’s a good challenge for you that will test your strength and conditioning. It also happens to be a great fat loss workout.

By the end of this workout challenge you will have moved 17,500lbs. Double or more the volume of most people’s entire workout, and in 15 minutes of high density work.

That is exactly the type of thing the kettlebell excels at. Swings are equally fantastic at building posterior chain strength while keeping you moving at a pace that is productive for conditioning and building work capacity.

One of the great features of kettlebell work that I think is often overlooked or under-appreciated is that it can be fun to go through a kettlebell circuit due to the way that you’re constantly moving and doing movements in often wider ranges of motion than say a barbell complex. People like Jen Sinkler are exceedingly creative in packaging brutal workouts into creative packages that you can enjoy sweating through.

Kettlebells are great – just don’t try to use a wrench to do a hammer’s job.