Recently, I posted an older video from last fall of me running through a deadlift medley at a strongman competition. The medley consisted of two lifts on a 2″ axle. A good friend asked how the 2″ axle compared to Fat Gripz on a standard barbell. I actually had no idea, so I set out to test it. A few months ago I had also posted a picture comparing the Fat Gripz and Fat Gripz Extreme on Facebook, but I think it would be useful to have archived here. 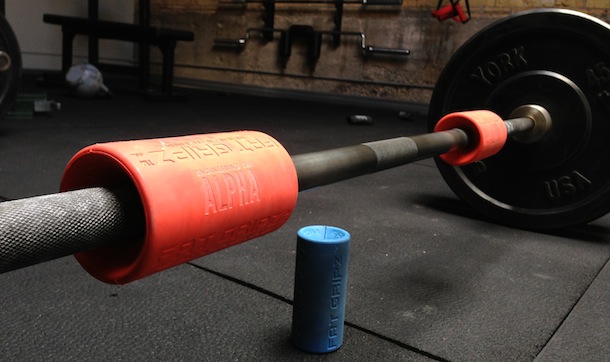 For the unititiated, Fat Gripz are cylindrical silicone grips that can be wrapped around a barbell, dumbbell, or any other equipment handle. The original blue Fat Gripz are approximately 2″ in diameter, while the new orange Fat Gripz Extreme are 2.75″, which may not seem like much but is an enormous difference in terms of difficulty. With the addition of these grips, a regular bell can imitate the strongman implements of yore.

They are, quite possibly, the cheapest and most useful thing you could possibly add to your gym bag. The amount of variety they can add to your training is hard to quantify. Want stronger and more healthy hands? Toss them in your gym bag, and rotate them into your normal movements on occasion.

I could go on and on, but I digress, because that’s not the point of this blog post.

Without further adieu, here are my numbers:

All the barbell lifts, and all the dumbbell lifts were done on the same day.

You can see that on the two-handed deadlift, while the diameter is essentially identical, the nature of the silicone grip makes it quite a bit harder than an actual axle. It’s hard to say what the transfer would be if someone trained exclusively with the Fat Gripz (whereas I have probably trained much more with the actual axle), but I think someone capable of a 300lb deadlift with Fat Gripz on a barbell would have at least another 20-30lbs in them on an axle.

On the single handed lifts, I think there is still a deficit compared to a solid handle, but it seems to be less. I don’t have Clean and Snatch numbers on the Bosco Bell (which is about 2.7″) yet because I’ve loaded it to 120, and that’s out of my reach for now. The Extreme size is every similar to the Bosco.

I hope this is useful to see how your training with the Fat Gripz compares to the implements they imitate.