Long before someone decided to call standing on an exercise ball like a circus penguin functional training, there were movements that served legitimate functions and purposes. Let’s face it, a squat might be a fantastic exercises because of the tremendous muscular recruitment throughout the whole body – but how did the weight get there? You stepped into a specially manufactured cage, with the weight already in place, and took it upon your shoulders. 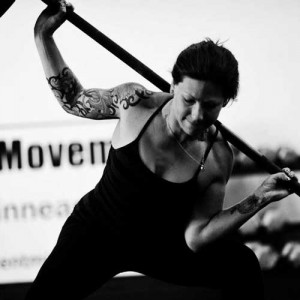 Barring the use of a squat rack, you’d have to get the weight there in the first place. Enter the Steinborn Squat. This movement was named after Henry “Milo” Steinborn, who was known to take a bar loaded to over 500lbs from the ground, tip it onto the back, and squat it for repetitions before placing it back on the ground the same way it came.

Shortly after I started practicing this movement, one of my clients, who is a tradesman, pointed out that this is exactly how they would hoist several-hundred pound bundles of steel rebar onto their backs to carry it. Talk about functional exercise.

But there are few exercises that will rustle the jimmies of uninformed onlookers like the Steinborn Squat. Do this in a commercial gym and you’re virtually guaranteed to have a manager ask you to sign an additional liability waiver.

The Steinborn Squat appears to be the holy trifecta of spine-exploding madness. You’ve got heavy weight, a bending spine, and MOVEMENT! Surely you’d be cruisin’ for a bruisin’.

Here’s the deal. The body can move in more ways than we can count. That includes the spine. No one looks at a Cirque du Soleil performer and assumes that they’re going to be in a wheelchair in the next moment because they’re moving, bending, flexing, twisting, and extending their spine. As soon as weights get involved, the whole mindset changes.

Here’s where the real problems happen:

I help a lot of people get out of back pain. I’m not going to load a bar to 225 and ask them to Steinborn it the first day they walk in my gym. Within the first month, however, I miiiiight have them test out a Steinborn Bend (part of the progression I’m going to teach you) to reintroduce a movement to their body they are lacking.

Likewise, my spine isn’t going to shoot out my ass because I’m doing a 300lb Steinborn any more than yours is when you do a deadlift with perfect form and a neutral spine.

At The Movement Minneapolis, we’ve developed a bit of a teaching progression for the Steinborn. Not because it’s important that everyone learn to do it, but more because certain components of it can be useful without doing the whole thing – and then some people want to learn the whole thing.

The Steinborn Bend is a movement we came up with that teaches the deep squat lean or bend that is the primary movement in the Steinborn. We have people start out with a PVC, and move up to a bar or more.

The Anderson squat is a variation in which the bar starts out on the pins in a power rack, you set up in the bottom  of a squat position, and then stand up with the bar from there. It’s similar to a box squat in the sense that there is no stretch, and no eccentric component of lowering with the weight before reversing direction. You are required to produce force from a “cold” start. The exact height you start from will depend on you, your squat, and the weight you intend to use. Play with it.

The moment you’ve been waiting for. You’re going to back squat, without the user of a squat rack. Never again will you be frustrated by someone curling in the squat rack. Let’s go over the basics, then I’ll cover some tips from experience.

Here are some notes from my experience:

Armchair experts on the Internet love to fear monger about how if you move the body in any other way than what they deem to be acceptable it’s going to explode. Work within your limits, but explore your capabilities and find out what is possible. You can do some pretty amazing things.