This is a guest article by Doctor of Physical Therapy, Erika Mundinger, who gave a tremendous talk at The Fitness Summit in 2015 on how to deal with back pain caused by SI joint dysfunction. Her talk was one of the most popular of the weekend, and I knew this information would be helpful to other lifters and coaches so I asked her to put together an article for me. While there can be myriad causes of back pain, among experienced lifters it very often comes down to a lack of complete function in the SI complex, which these alternatives do a remarkably effective job at resolving. Hit us with the science, Erika…

It’s not news that 70-80% of the population has or will at some point experience dysfunction related to back pain. But back pain can come in many forms which can make dealing with it a bit tricky.  Somewhere between 15-30% of the people with back pain of these people will have either an accompanying sacroiliac joint (SI) dysfunction or an isolated SI dysfunction. This can range from a minor ache to a completely disabling. When it comes to lifting weights, having SI pain can be downright scary. I hear weekly in the clinic “I can’t work out until this goes away.” Unfortunately, what we need to help our clients understand is that not exercising will certainly not help in resolving back pain. It doesn’t “just go away and fix itself” as some may want to believe, or as they may have been misinformed from an outside source. Most often there is a faulty movement pattern that occurs through the pelvis that will keep the problem at a low level smolder that may be almost undetectable only to have to it come back again a week, a month, a year later. On the other hand, exercising incorrectly will often aggravate back pain, putting people in a bit of a catch-22.

So we have no movement aggravating symptoms, yet moving may aggravate symptoms.

So what do we do? Ignore it? Hope it goes away anyway? Push through it? No pain no gain?

Where’s the middle ground? There has to be a way for not just physical therapists, but also for trainers and coaches, to help clients exercise both around pain and to CORRECT the associated causes of the pain in the gym aside.

While the typical home exercise program that involves just piriformis stretching, foam rolling, and clamshells is effective, there are more effective paths a lifter can take. (Note: These are beneficial exercises for SIJ dysfunction. Stay tuned for part II with more on at-home self  maintenance exercises.)

First, it helps to understand how the SI joint moves mechanically. 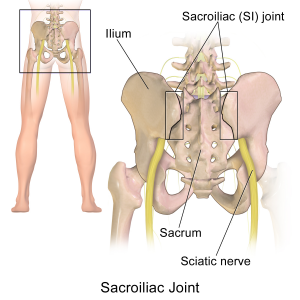 The SI joint and pelvis, like any other part of our body, moves on a three-dimensional axis. We can isolate each axis individually but for daily, functional movement, it moves simultaneously forward/back, side-to-side, and up/down. Think of walking for example. As one foot is forward the other foot is behind, the trunk rotates, the pelvis rotates, and one side will lift while the other side drops. Our muscles form “slings” around the pelvis working on longitudinal, horizontal, and oblique axes creating stability, also called force closure, from all directions.

Ok, so that sounds fancy and can get infinitely more complex if we were to break it down further. But what does this mean? In simple terms, to restore optimal mechanics in three dimensions it can help to train multi-planar movements.

How do I know it’s my SI, and not something else?

First, see your doctor. Typical SI symptoms will involve pain offset from the lower back, just above the hip and buttock. Pain will refer to the buttock, top of hamstring, and possibly around to the side of the hip. Symptoms will typically worsen with prolonged sitting, bending forward, bending forward and lifting heavy loads, and standing. Most people will feel better with walking and a bit of rotation. If this sounds like you, give these movements a try and see if you notice reduction in pain and better mobility. But again, these are “typical” symptoms and there is still variance from person to person. If symptoms are more localized to the spine itself, include pain shooting down the leg past the knee, or if you have numbness and tingling in to a specific area of your lower leg and foot, these may not be appropriate or productive exercises to try. And of course, if things aren’t improving, seek medical advice.

Without further ado, here are a few common exercises with correctional and rotational modifications to try with your current lifts.

This is a fantastic exercise to train the glutes, core, and hamstrings not to mention pelvic stability and balance. However, if we have a weak glute max and glute med, which is typically seen with SI dysfunction, the we get uneven closure of the SI joint from an unbalanced force locking system. We get excessive longitudinal pull through the SI without enough diagonal/oblique stability. The result is even more compression and shearing on an already painful joint.

This exercise utilizes more glute med and piriformis than the single leg deadlift to help provide more uniform force closure. To perform this exercise, start with a kettlebell or dumbbell at the side of the foot, bend down rotating slightly to pick up the bell, and then stand up to a neutral position. 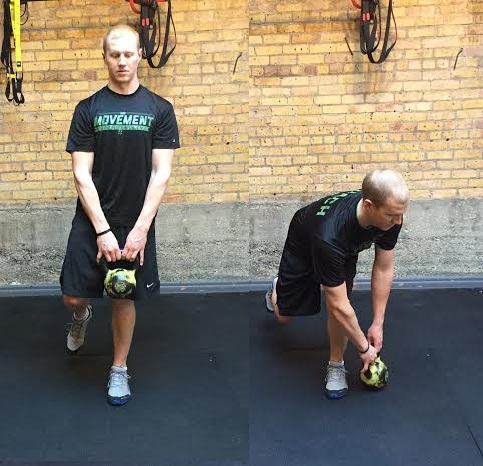 Please note, if you lack hip or spine mobility to comfortably twist to pick up the bell, or if balance is poor, elevate the kettlebell or dumbbell by placing a yoga block or a small step under the bell at the side of your foot so you don’t have to bend as far.  The exercise will still be beneficial and will prevent any straining.

This exercise can also be done on two feet if balance is poor.

Why it hurts: As with the single leg deadlift above, this is a single plane movement that relies on glute max, glute med, and hamstrings. While EMG studies have shown that there is more glute med and max activation with the single leg squat compared to the lunge, looking at activation alone can be misleading. In a single leg squat there is higher activation of glute med than the lunge, but there is a much greater activation difference between working and non-working leg. The result is a force differential that is significantly greater across a system that is already lacking the function to stabilize opposing forces. In other words, the single leg squat is too stressful and looking at activation of one muscle in isolation can be misleading as to how it contributes to the system. The net result is that the lunge is a better exercise, but we need to make it activate more glute med than in a normal lunge pattern – that only exacerbates the singular plane problem.

Similar to single leg rotational deadlift above, this exercise helps to activate more glute med and piriformis for SI mobility, not to mention the rotational movement of the exercise helps to retrain normal SI mechanics and rotation. Start with your foot on a Valslide, or furniture slider, or if on a hard floor have a towel under your sliding foot. As you slide your foot back, cross it behind you. As you stand back up think about engaging all the muscles around your hip to pull yourself back in to standing. 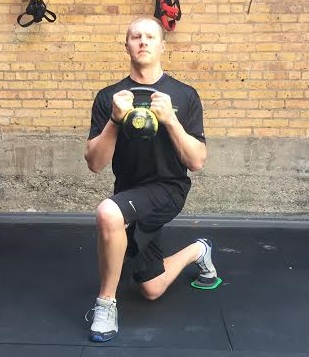 Swings are great for glutes, not to mention great for simultaneously getting a quick burst of cardio. But SI dysfunction sufferers tend to approach this move with a bit of trepidation and fear. This is one exercise I have heard clients at the gym commonly say “I wish I could do swings, but I always hurt too much after.”

This motion utilizes the spine’s natural rotation and fires a ton of muscles along the diagonal planes, engaging the glute max and med, obliques, and lats to name a few. Stand with your feet slightly wider than hip distance and staggered with one foot forward and one foot behind. Grab the kettlebell in the opposite hand of the forward leg (so if stance is staggered with right foot forward use your left hand to swing the bell). Perform a one-handed swing keeping the torso pointed forward but allow the hips to rotate slightly following the bell at a 45 degree angle from midline. 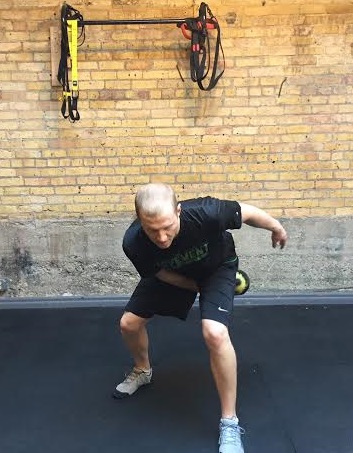 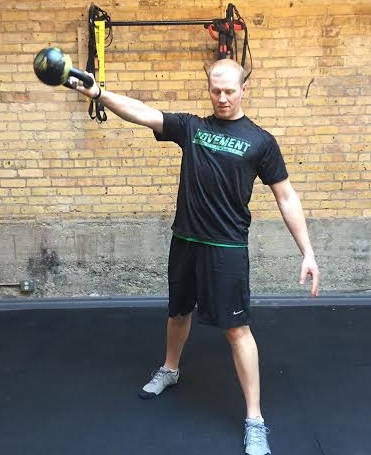 You may notice that when performing these movements that one side may feel easier on one side than another due to natural asymmetries and muscle imbalances. Also (disclaimer time) if you have limited rotation, be sure to start with low weight or no weight and focus on just doing the motion. Also never force more rotation than you can comfortably do. Starting with heavy loads or more rotation than available right off the bat with underlying dysfunction may exacerbate symptoms, but working through them with the focus on mobility can absolutely serve as a means to correct.

P.S. If these tips are helpful to you, you might find these tips helpful as well which are based on the same concept of how the SI functions and what causes and fixes this type of back pain.