Be Good At Everything

Hi, I’m David Dellanave. Depending on the day you could call me an entrepreneur, baker, lifter, skydiver, tinkerer, investor, carpenter, writer, welder, hunter, coach plus a hundred other things. After I sold my first major company and opened a first-of-it’s-kind gym I realized that not only was the usual advice to become the best at one thing not right for me – in fact being really good at a million things is what makes me tick.

And I can teach you to be good at everything.

I sort of touched on this in my recent article, whether training has to be fun or not, but it comes up enough that I want to address it on its own.

People often ask me what I think of this boxing gym, or that Zumba class, or insert whatever latest fitness-esque trend is happening at the moment.

I know that a lot of folks in the industry take the position that something is better than nothing and as long as people are moving that’s a good thing.

I don’t hold that belief.

Yes, the human body needs movement. But movement, especially in the sense of any kind of strenuous exercise, is a stressor. If you’ve been reading my work for any length of time you’ll know that stress can only be judged by the response, not by the stressor. Most people’s lives are already chronically distressful in the sense that they’re not responding well to the current stressors in their life. Taking a “boxing” class as a way to exercise is very often a good way to pile on stress they can’t actually handle as opposed to stressors that are specifically being chosen and targeted because they respond well to them – which is why we use biofeedback to guide our training towards the positive.

When is something worse than nothing? When the something is actually net harmful as opposed to simply maintaining the status quo.

Yes, of course less-than-ideal fitness classes can be gateways and lead to seeking better. And of course in some cases it’s not actually net harmful and just getting moving is better than nothing.

But one of my guiding principles is the pursuit of better, and there is much, much better than most of the fitness-adjacent entertainment programs that people and businesses pass off as ways to fulfill that human need to move and be physically challenged.

So no, I don’t think much of the latest and greatest ZuluX-Fit classes as it pertains to making you and your body better. But if you just want to kill an hour sweating go for it I guess. I can think of other ways to get sweaty.

Something that seems to be coming up a lot lately is the question of whether or not training or working out has to be fun.

Obviously, it makes it a lot easier to keep your workout routine if you enjoy every minute of it. Who wouldn’t prefer loving their workout and thinking it’s fun all the time?

There are certainly lots of activities and ways to move your body that are also enjoyable. Just to name a few off the top of my head hiking, climbing, team sports, kayaking, biking, and running are things that people think are fun but are also ways to get the heart pumping and stress your muscles.

Except, it’s not the same.

The gym and what I think of when I speak of training in general, is kind of like a mechanic shop for the human body where necessary repairs and preventative maintenance can be performed. The entire environment you live in is extremely obesogenic and harmful. Nothing about waking up to an alarm, driving to an office, sitting in a chair under neon lights all day doing work you hate, driving home and watching TV or using the computer with artificial lights on until you go to bed around midnight is good for you. In fact it is probably very literally killing you.

And it’s not always fun. My friend Maggie recently pointed out that brushing your teeth isn’t especially fun but you do it because you know it’s necessary. I love this analogy. Training isn’t always going to be fun but it’s absolutely necessary – if you want your body to keep working well and be ready and able when you want to use it to do things that ARE fun.

For sure you should line up as many things as possible to make things that make you better easier and more fun. If you absolutely hate your gym environment, then find one you like. If you hate all gyms period then suck it up and do the work. If you hate your workout program or what you’re doing, then find one you can get excited about. But if you switch from progressive resistance training that targets specific needs you have to pilates or whatever-the-fuck-bar-method is remember that you’re not longer brushing your teeth – you’re just doing an activity that is fun but probably doesn’t clean your teeth.

I can tell you from my personally experience, and I think most people would find this hard to believe, but I mostly hate training. Very rarely do I enjoy the actual process of lifting. Maybe when it’s going really well or I’m knocking down a PR. But most of it is just work that needs to get done because I like looking the way I do when I lift, I like maintaining the decade-plus investment in my physique and health, and most importantly I like the way my body functions as a result. I’m capable of throwing a fifty pound pack on my back and hiking up a mountain at 10,000 feet to chase elk on a whim with no specific preparation. At an age when most guys are declining in various functions, I’m not. That’s worth doing the work that isn’t fun.

Sometimes training is going to be fun, sometimes it’s not. You can either accept this and do what is necessary, or you can keep chasing entertainment.

It’s hard to believe that it’s been almost a decade since the first time I completed the Million Pound November challenge. I honestly had no plans to do it this year, wasn’t really ramped up and ready in terms of volume, and wasn’t even convinced I’d be able to finish it when I committed myself to it. Would I be able to do a high stress, long-term challenge that I last did when I was under 30?

Quick recap in case you have never heard of MPN. The goal is to lift a million pounds of volume in 30 days, ideally November. This can be an individual challenge, or a group effort like we do it at The Movement Minneapolis. For perspective a typical strength or circuit workout tends to be in the 10-15,000 pound range. So you’re looking at doing two to three times typical volume every single day for a month. It’s eminently possible, but it’s not easy. 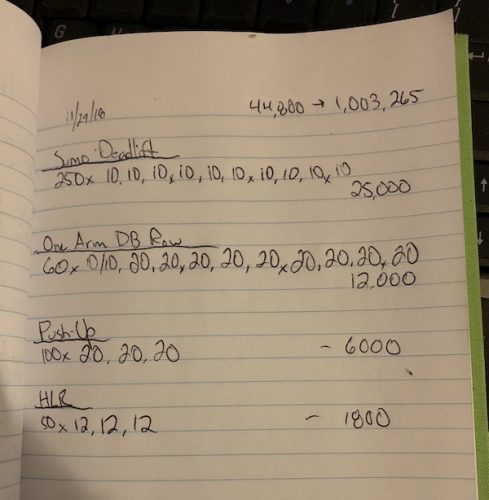 My hope whenever someone undertakes a challenge is that they’ll learn something from it, regardless of whether or not they actually complete it. Million Pound is one of the favorite programs we run  Throughout the challenge I try to foster this by asking people what they’re noticing, how they’re feeling, what seems different, and so on.

This time around I noticed some things that were distinctly different than the last time I completed it. I should note, I’ve only really committed to it twice, and completed it twice. There have been fits and starts over the years where I didn’t dedicated myself to it, but I never tried and failed due to not being able to complete it.

This was, in a word, not ideal.

By the end of each of the two streaks I was feeling almost insurmountable fatigue and lack of desire to train. Under any other circumstances I would have taken days off before I even got to that point, but it was interesting to see how far I could actually keep going, and continue to find things that tested well via biofeedback. I don’t remember feeling that sort of fatigue last time, which I don’t know if I can attribute to not taking days off along the way or to simply being almost ten years older.

Perhaps the only thing that kept me healthy was that I respected the significantly increased need for sleep, and I made sure to get to sleep early, and take a mid-day nap if necessary.

So the big lesson for me was that if I’m pushing volume to the limit, about five days is where things start going downhill.

Whether or not you succeeded is irrelevant in this. What did you learn?