In case you didn’t see it, a couple weeks ago Minnesota Viking Jared Allen performed one of the most impressive (and hilarious) tackles of a quarterback. Allen was busy tangling with an offensive lineman as Eli Manning was scrambling to get the pass off. Instead of going AROUND the lineman (Beatty), Allen just reached around him, grabbed the back of Manning’s jersey and held on. And held on. And held on. For at least four seconds until he got leveled by another Viking. You can see the whole clip here. 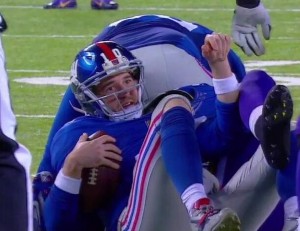 It was glorious. And a perfect excuse to talk about a subject I’ve wanted to right about for some time: training for grip strength.

When people think of grip strength they think of crush grip. This is the type of grip Jared Allen was testing when he clamped his fingers down on Manning’s jersey. This is the type of grip involved in closing a gripper, and is the one people who have been training on barbells for years are the strongest at naturally. This type of grip strength, unfortunately, carries over poorly to the other types of hand strength. Yours truly happens to have an above-average crush grip (and so of course it’s my favorite type of grip to train) due to years of heavy deadlifting, but my pinch grip for example is abysmal.

One of the very best ways to train the crush grip is with a torsion spring gripper. These grippers, like the famous IronMind Captains of Crush series, are legitimate strength tools unlike the silly little plastic-handled grippers you can buy at any sporting goods store and do hundreds of repetitions with. Closing a difficult torsion spring gripper requires skill and strength. 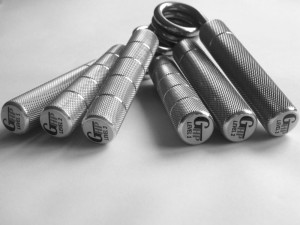 Enter Adam T. Glass, a man whose hands are as immalleable as the iron that forged them. I am lucky to have learned everything I know about grip training from Adam having spent years training with him. It is a longstanding joke that if you hang around Adam long enough you will eventually get into grip training. I denied it for a long time that I was “into grip” but when I realized I had competed in more grip contests than any other type of contest I had to eventually concede that I was into grip training.

But I have digressed, so let’s get back to the topic at hand. The torsion spring gripper needs to be set properly in the hand to maximize the leverage to close it. Simply putting it in your hand and closing it is called a no set or a table no set grip. This is rarely used, especially in contest, partly because it depends greatly on the size of the hand. To properly close a gripper to a set standard (often a parallel set, or a 25mm set), you “set” it in the hand using your other hand to partially close it to a set width. I’ll let Adam explain how to do it:

When Adam says he is not an expert, he’s being modest. He’s on a very short list of certified Captains of Crush who have closed the CoC #3 under strict judging criteria.

If you want to get started with some grippers, I can strongly recommend my buddy (and neighbor!) Matt Cannon’s company Cannon Powerworks. Every company has a slightly different way of rating their gripper difficulty beyond the level number or name they assign it. For example, the IronMind CoC #1 is rated at 140lbs. Unfortunately, no one really knows how these ratings are determined and how they compare to one-another since every company differs. Plus, there is always variance from one gripper to another. Grip fanatics therefore developed the RGC, or Redneck Gripper Calibration, rating system to consistently measure them in the same fashion. Matt is an old hand at running his RGC rig, so he can measure your gripper before shipping it out to you for a few bucks extra. This is really critical if you’re serious about your grip training because you could have a significant difference between two of the exact same model gripper. It’s ends up being like thinking the bar is loaded to 130 when it’s really 150. I don’t get anything for recommending Matt and his site, I just would like to see him do well with his side business. 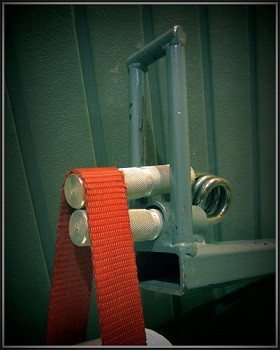 Just getting started? Get a gripper rated (via RGC, not manufacturer rankings) well below 100, and one right around 100. You will be able to progress the easier gripper until the ~100 one is easier. Then make the jump to something in the 120 range. I like the IronMind grippers, and the GHP are also very nice pieces of equipment. For about $50 you can make a significant impact on your grip strength.

Grip training may actually be the highest payoff training you will ever do. If the benefits of being able to hold on to things is lost on you, I’m not sure there is much hope of convincing you. Glass was always fond of pointing out how it’s unlikely that you will ever have strong hands without a strong body, but there are lots of strong bodies without strong hands. Jared Allen could push and pull all the iron in the world, but if he couldn’t keep his hand closed on that jersey, that sack wouldn’t happen. If you can’t hang on to that bar, your deadlift isn’t going to happen no matter how strong your legs are.